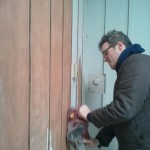 It is odd when you are working on a house that was left to simmer in it’s own juices for a while. It tends to be neither here or there as far as not lived in but still coated in the physical and psychic residue of it’s former residents. The house is by no means creepy or scary even if visually it is a little off setting. On the contrary, it seems that the place has had some warm and pleasant times in it’s day. The new work that is going on in the house has made a noticeable dent in the stalled out roof disaster from the last couple of weeks, stressful and a waste of my time and effort. I am moving on, but it is a pain. The house seems to be loosing it’s old self and changing to it’s new self. It even smells open and aired out compared to the stale whiffs I took in when I first looked at the place. I don’t know if everyone experiences this but I seem to have a ritual when it comes to changing an old place into my new home. There is a period of Scooby-Do like discovery, when you are finding clues regarding the people that once resided there. So far I have been actively squirreling these items away as I find them. The inventory is so far not much to write home about, but at least worthy of repeating here. Random items such as 2-3 different caliber of bullets from noticeably different time periods, two glass chess pieces (rook and a pawn), one domino, some segments of plastic vine, a series of clips and pins and last but not least. A set of dentures. The dentures are of the flexible variety. They hadn’t been used in quite some time, wrapped up carefully in a bag. Kenneth, a good guy that has been helping me do demo on the place found them first, lucky guy, said it kinda startled him when he first discovered them. Hopefully I can find a  few more little clues to tell me what I want to know about this place.