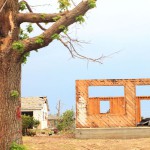 It was really weird for me when Joplin was hit by a giant tornado. I had no idea that it was going on because Meredith and I went out for drinks at a place down in Lakewood, a neighborhood in Dallas. It was a Karaoke night everyone was having a good time and just chit chatting. Wide screen televisions were running through an assortment of different news stories which Meredith was pointing out to me from across the table. The screen had what I thought was some sort of footage of Iraq or Syria or some other war torn country. The building had all of it’s windows blown out and was riddled with pock marks and damage. Meredith was looking at me like it was serious, I couldn’t hear what was being said so I was confused, something wasn’t right. It finally hit me when I looked at the caption. I am reading the word Joplin on the screen. I ran out side and immediately began dialing up my mom finding out if my relatives were alive and okay. I was panicked! My mom was happy to report that everyone was okay. Ean immediately started planning on when we could go up to Joplin to help out. We went up as a group and wanted to help out. Getting there I was able to meet up with the relatives and was happy to see everyone was okay, but I could tell they were tired out from all that happened. The area I was in was mostly fine. There was some minor damage was here and there but everything was mostly normal. It wasn’t until I started out looking at the hardest hit area that I had a sense of perspective on the whole thing. Large patches of town that were places I grew up summer after summer and on the holidays as well were gone. Flattened, shredded, like a giant lawnmower trimmed it down. It was a mess. Everything was pretty crazy to see. My grandparents was even ripped up bad enough to be demolished. It was a crater. A blank spot. I couldn’t even relate to the idea that it even existed. It wasn’t until I saw the back garage pad that I noticed the green paint of the back porch. I got quite teary at that moment. I took photos of what I saw, I have more, will post more.