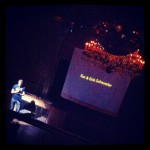 The early afternoon scramble trying to cobble together ideas and thoughts ensuring a good lecture was one of the most white knuckle moments of the evening. My brother Ean Schuessler and I worked diligently trying to figure how to make this scramble of information somehow make sense to us and hopefully later that evening to our audience. Self editing is a complete pain in the ass, when you have to self edit with another, that is even more ridiculous, compounded that it is with your sibling of many years it is a completely different plateau of back and forth. Ean had this extremely brilliant albeit overly complex plan on how to make the worlds most incredible presentation. I myself am more of a Percival type so I wanted to just go directly down a path and do a nickel tour. Together we ended up building a pretty darn satisfactory presentation.  A comprehensive guide to what we think is scary complete with tornados, nazi zombies, exploded buildings, raw squid, limousines, pig heads, etc.

I must admit I did have a tinge of satisfaction to quickly draw from the massive wealth of experiences to draw from and in this case I felt that the substance was vastly more important than the style on this one. That proved to be a good thing when we made it over to the Lizard Lounge/The Church. A massive night club landmark sitting in an old commercial building near downtown Dallas right outside of Deep Ellum. I arrived with Ean and fellow app cohort Thomas Williams noting that the Easy Slider truck was nearby, the promise of  a deliciously rewarding snack awaited us after we finished up our public speaking gig.

“Dang they make some good sliders” might have been either muttered or psychically emitted between all of us as the intensely delightful odors emitted from the mobile food dispensary. The ladies that created those golden nuggets of culinary salvation knew that they built a high caliber snack that was second to none, it was crafted to please, cutting through the foggy minded drunks that gladly departed with a couple of their hard earned bucks to ingest a nugget of beneficial protein to curb oncoming hangover. Even at this early point in the evening the smell was enough to trigger the hunger mechanism hard wired into my giant lumbering ape frame. I bypassed it by concentrating on the other primal energy bouncing carelessly from my brain down to my stomach.

We entered the Church, the club was schizophrenic mess, on the prime time nights (Thursday, Friday, and Saturday) it is named the “Lizard Lounge” a typical dance club full of delightful douche bags and drugged up club kids having a hard time keeping their relationship with where the floor is while they gyrate madly with out looking too stupid. On the alternative nights (Wednesday and Sunday), it decides to slip on something a little more Gothic. At some point the people that go there have to understand that they might as well be dressing up in 50’s sock hop outfits and dancing to Chuck Barry. The vintage style and look is not lost on me. I remember goth clubs back when I was in high school and any time a return there it is a time capsule with a guarantee to hear songs like “Bella Lugosi is Dead” or some Lords of Acid track. I wont kid myself, I wore black clothes on occasion, however there is a certain point where that dead horse has been kicked so much that it is a bloody pulpy mess of goo.

The place was kinda creepy any how, it was originally built out as a strip bar in the 80’s. Heck it was even in a movie with Eric Stoltz in it, you know, the dude that was the main character in “Mask” The place was more gothic than dance club. Dark walls and wood details did fit the evening perfectly. We wandered into the space and grabbed a few free drinks since we were presenters (thank you AIGA). It was a great idea to ply us with a little booze just to shave off a little of the anxiety and add in a little liquid courage into the mix. It was good seeing everyone that made it, it was a little exciting and scary. No pressure.

The speakers dropped down in a line of chairs waiting for their turn at the stage for their Pecha Kucha presentation. The way it works is simple. Twenty slides. Twenty seconds on each slide and 13 presentations. The majority of the speakers were local designers. Mostly a good lot of interesting folk, there were a couple of exceptions but it kept me entertained for most of the evening. Ean and I were set to last. Well the 12th presenter, the 13th was drawn from random in a little raffle bowl at the main entrance. The poor bastard that won got to go up and improv a Pecha Kucha presentation from a set of 20 pics put together by Brian Murphy, one of the originators of the PK in Dallas that I help out on.

I noticed that most of the presentations that seemed to suffer the most on lack of content were the ones with the best looking slide designs. I suppose that you could take something away from that observation that substance is a lot better than just pretty window dressing. I could imagine that if you are showcasing people that make things visually cool it is a little more difficult to put some oof behind it aside from just making it look good. Don’t get me wrong there were a couple of really good ones. One guy’s dead pan delivery about being terrified by the fat and caloric content of the Sonic foot long chili dog and Jack in the Box’s Baconator were at an almost Steven Wright level of awesomeness.

The moment of dread was nigh. Ean had to take a leak and was about to scamper off as this photographer exited stage left and Brian stepped back onto the stage. I commented to Ean noting that I think we were next. His face let off an expression of slight discomfort as it dawned on him that he would just have to hold it. Poor bastard. I must admit, it would have been a horrible thing to wet yourself at a lecture. Nightmarish actually, up there with having dreams of being in high school and not realizing you forgot to put clothes on. He soldiered through it. I was proud of my older brother, he kept it together, a complete 360 from earlier in the day when we couldn’t get our presentation together and loosing steam. It would have been easy to bow out for both of us, but we stood fast and got it done. We strode up on stage encountering the first big fear. One mic and two people speaking, it was especially difficult because the pick up on the mic was terrible. You had to get it right up on your mouth for effective amplification. Aside from a couple of offset timing from frame to frame, Ean and I were like old pros at mic hand off. Amazingly, little or no stumbles happened and the images were poignant and effective. We brought up points that were scary to us and pointed out concrete examples of how we delved into it. As brothers, we explained our individual experiences and how they related to each other, we had funny moments and serious moments, that hit people effectively. Sharing our trip up to our grandparents house after it was devastated from the tornado in Joplin I could feel the hush from the audience and how much energy reached out to us. It was powerful. We explained to people that there is nothing more scary than having your past your heritage, parts of your life, just simply erased by an act of god or a force of nature, whatever you want to call it, it is terrifying to the core.

After that we discussed projects we have been involved in and how they scared us and how they impacted us long term. Donnie Davies was one of the items discussed. (http://www.eveningservice.com/, http://lovegodsway.org/, etc) This project was so fun and exciting to do. I would love to have a benefactor that would bankroll more mischievous behavior like this for my daily job. It was a giant prank going against the super “moral” whack jobs out there that call themselves conservative. Donnie Davies is an ex-gay christian pastor that wanted to heal gay people from their affliction. The project was so fun to do with 8 million views. That is a lot of traffic if you ask me.

The other project we discussed was Disturbathon. The name of Disturbathon was coined from David Hanson, great pal and robotic artist extraordinaire.  The name came when he decided to turn his UNT apartment space into a terrarium. He was on the verge of discovering something wonderful or going insane and ended up having a fun get together in the process. I wasn’t able to attend the first one but started having fun in it’s second year of conception. I would however not point to one particular person as the creator/mayor of disturbathon. Disturbathon created itself, mutating in countless directions consuming creative thoughts and regurgitating it into a frothing mass of gluttonous freaky indulgence. The party has grown and changed over the years and it is interesting to see how new people come into the puzzle box of a party and find ways to express their ideas.

The talk wound to a close and it was well received by everyone that viewed it. I hope to do more discussions such as this in the future.